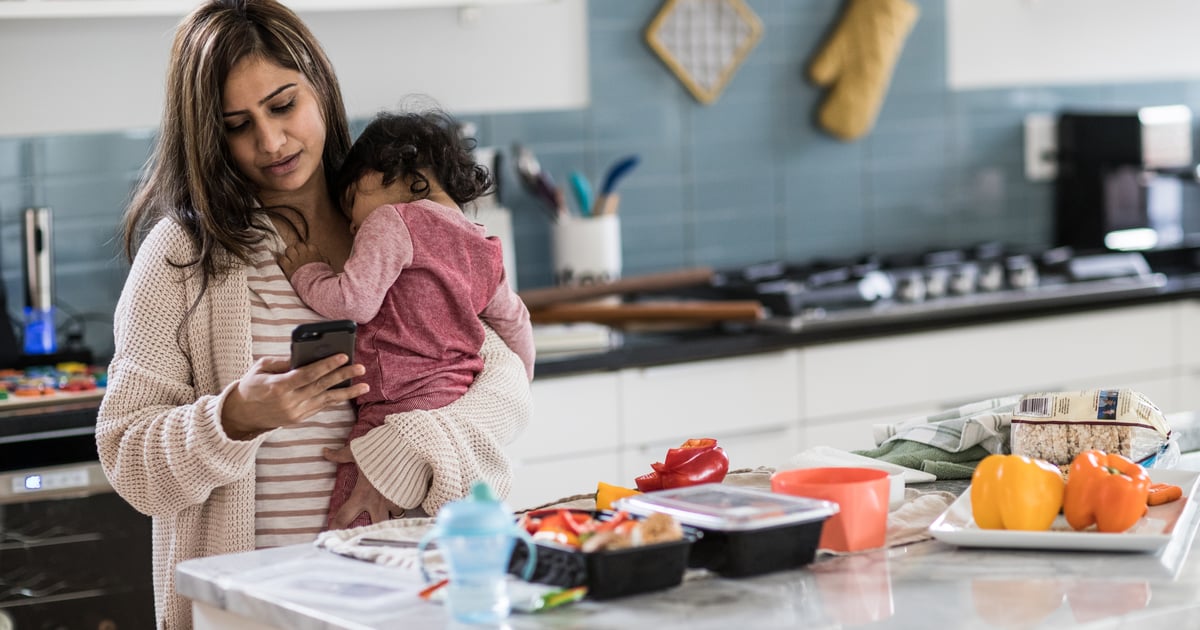 Tired of Prepping 5,743 Meals a Week For Your Kids? This Pediatrician Has Tips to Keep You Going squib 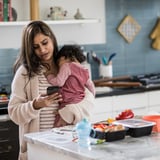 After dinner with my family last night, I performed a rather sadistic math equation. I decided to total up all the meals we've had to serve during our time sheltering in place. We're a family of four, and we rather graciously provide breakfast, lunch, and dinner. Considering we've been doing so for roughly eight weeks, that means we've served up 168 meals. A lot, right? But consider each mouth we've had to feed. Well, that's 672 plates of food. Oh, and who could forget the three to 17 snacks requested over the course of each day. Let's say we hold our ground at four snacks. That's 220 additional on-demand food-prep opportunities to take into account. I'm no expert, but that feels to me like we've been made to cook 4,596,381 separate times during lockdown. (My youngest has maybe eaten more than a few bites from 14 of them.)

Cooking fatigue hasn't just set in. It's caked into the pots and pans.

Cooking fatigue hasn't just set in. It's caked into the pots and pans. It's causing cracks in my husband's dry hands, the ones that dutifully do all the dishes - and let's be honest, most of the meal prep. It's made me give up breakfast all together, just so it's one less food problem I have to solve. And we're definitely not the only family who is over it.

So many parents have taken to social media to share their desperate "hacks" - which might as well involve just setting up a ladder in front of the fridge come meal time - and vent their frustrations. Among them, several concerns repeated themselves, and they all started the same: "How bad would it be if I . . .?" "Should I be worried about . . .?" "Is it OK if I don't . . .?"

My knee-jerk reaction was to say, "not bad at all!," "no!," and "hell, yes!" But, I figured it'd be more helpful if I reached out to someone with actual credentials to provide our legion of full-time short-order cooks with some answers. Dr. Manasa Mantravadi, a pediatric hospitalist at the Riley Hospital for Children in Indianapolis, is a mom of three who is so passionate about feeding kids safely that she started her own dinnerware line called Ahimsa - the world's first stainless-steel collection of plates, cups, and serving utensils for children. And because she's in the same position as the rest of us (her total is looking more like 870 plates!), her professional advice is thankfully filled with the practical tips we crave even more than chips and ice cream right about now.

Related:
Psychologists Recommend We Parent in "Shifts," and It Is Single-Handedly Saving Our Marriage

"Is it OK if I'm serving way more frozen meals than I normally would?"

Parents are seeking some perspective on how much they can cut back on homemade dishes in lieu of quick freezer meals or takeout and delivery.

"Parents should do what they can!" Mantravadi told POPSUGAR. "We are facing some challenging scenarios. You need to do what is best for you at the time. If you just need a break, order some food! There is nothing wrong with that!"

"It's not about getting it perfect, fresh from scratch each meal. It's helping to create a sense of balance in what we eat and how we eat."

Still, she noted that modeling healthy eating habits from a young age is shown to help children make healthier choices as an adult. "If you order out, you can still choose healthy options off the menu; or if you love pizza as much as we do, just serve it with carrots, strawberries, and a glass of milk. It's not about getting it perfect, fresh from scratch each meal. It's helping to create a sense of balance in what we eat and how we eat."

The bottom line, she said, is that serving healthy foods doesn't always have to be labor intensive. "I am a stickler for fruits and veggies at every meal, and adding some fresh fruit and veggies to any frozen dinner or takeout instantly adds street cred in my book!"

"Should I be worried that my kids aren't getting enough healthful foods at every meal?"

In general, Mantravadi implores parents not to worry and that they may be offering their children more of a variety of foods from the five major food groups - breads and cereals, vegetables, fruits, protein, and dairy products – than they realize.

She also notes that parents feel stressed when their children don't "finish their plate," but this is often an issue of offering too-big portion sizes.

"Serving sizes vary a bit by age, but one method of determining appropriate servings is the 'hand' method," she said. "The palm of the child's hand should be used to determine protein portions. A child's closed fist should be used to determine whole grain portions. Use a 'half fist' portion each for fruits and vegetables. Remember that additional portions may be provided using the same technique if your child is still hungry. Let the child determine when they are full, so they learn their own hunger cues."

"Should I start giving my kids vitamins right now?"

The American Academy of Pediatrics believes that healthy children receiving a normal, well-balanced diet do not need to supplement those nutritional allowances with vitamins.

"For some children, however, supplementation may be important," Mantravadi said. "Your child may need some if your family's dietary practices limit the food groups available to him or her." She noted, though, that this is more of a consideration for those families following, say, a vegan diet, which might be deficient in critical vitamin and minerals such as vitamin A and B12, iron, calcium, zinc, and riboflavin. She recommends talking to your pediatrician before making any major dietary changes - for example, cutting out all meat or dairy - with your child.

If you do opt to offer a vitamin, be cautious when dosing. "Megadoses of vitamins can produce toxic symptoms, so the key is to try to get what you can naturally from food."

"But what specific nutrients should I be most concerned about?"

For those families who still aren't convinced that their best is likely good enough, Mantravadi said that worried parents can make a point to add more iron and vitamin D, which is essential for strong bones, into their child's diets during this time. "We think about those two most often in pediatrics," she said.

Iron deficiency, she said, is one of the most common problems among children, which is why pediatricians screen for it at the one-year well-child visit.

"It's best if this comes from foods, including red meats, iron-rich vegetables, and fruits with vitamin C, which enhances iron absorption," she said. "Drinking large quantities of milk may lead to iron deficiency anemia as your child may be less interested in other foods. If your child is drinking 24 to 32 ounces of milk or less each day, there's little cause for concern. If he or she drinks much more than that and you can't get her to eat more iron-rich foods, consult your pediatrician about adding an iron supplement to his or her diet."

Another possible call to the pediatrician is if you are concerned your child's intake of vitamin D, which is found naturally in only a few foods.

Back in 2014, in response to studies that concluded children were not getting enough vitamin D, the AAP increased the amount it recommended in both children and adolescents. Although the sun is an easy supplier, several factors - including long winters and the health effects of direct sun exposure, not to mention shelter-in-place orders keeping many families indoors more than usual - have made it a tricky resource.

"Enriched foods are another way to increase the vitamin D in your child's diet," she said. "Look for foods fortified with vitamin D such as milk, cereal, orange juice, yogurt, and margarine."

"Is there any way to cook less frequently without ordering in?"

Some people don't have it in their budgets to order from their favorite restaurants every night they need a break, which is roughly all of them. What then?

She has even taken to designating an "all hands on deck" day in the kitchen in which, as a family, they all participate in different aspects of prepping freezer meals. "Kids love to be a part of the process, so while you cut up veggies, have them line up containers to store them in and label them."

"We know that children who participate in meal prep tend to have a healthier view of food and make better choices at meals as they grow."

She's also found some workarounds with snacks. If you used to serve up fresh smoothies for a daily snack but can't fathom the upkeep of doing that on top of all the other daily preparations, she suggested turning to the freezer again.

"We are avid Popsicle makers in our home," she said. "We make fruit-and-veggie smoothies in large batches and then use half of that batch to pour into Popsicle molds," she said. "I also make batches of mini pancakes. I throw the ingredients into a blender along with either spinach, blueberries, carrots, or beets. Then we have a rainbow of colorful bite-size snacks that I can throw in the freezer. I just heat up and serve with some honey as a snack."

Related:
Should You Put Your Kids Back in Day Care? An Expert Weighs In

"How bad would it be if we just threw in the towel and let the kids fend for themselves?"

If you are at the point in which reaching into a bag of Goldfish crackers, grabbing a fist-full, and scattering them on the kitchen counter feels like the most you can do today, Mantravadi wants to remind parents to see the positives: "Hidden benefits of constant meals is opportunity!"

She added that the more time you invest up front, in teaching them basic mixing techniques or chopping and peeling skills, the sooner they'll be able to actually help in the kitchen in a meaningful way. Plus, if they help, they may be more likely to try new foods: "We know that children who participate in meal prep tend to have a healthier view of food and make better choices at meals as they grow."

Mantravadi also considers her time cooking as her kids' daily homeschooling session. Adding a half cup of sugar with a quarter cup of flour can serve as a real-world lesson on fractions, she said. "At the stovetop, we talk about how the Instant Pot releases all that pressure," she said. "'Oh that's water,' I'll say, and my children automatically talk about the water cycle they learned at school. If we make ethnic food, we talk about that country and see what they know and Google what we don't know. It's all about just creating a door to conversation."

Speaking of conversation, whatever food you provide - even if it's boxed mac-and-cheese with, Mantravadi nudges, a veggie mixed in - should be served at the table and eaten as a family as often as possible.

"Three meals a week together around a dining table is proven to lead to healthier children," she said.

And for those still feeling guilty, Mantravadi makes it clear that if she can let loose, so can you. "On Fridays, we serve popcorn and ice cream with pizza."